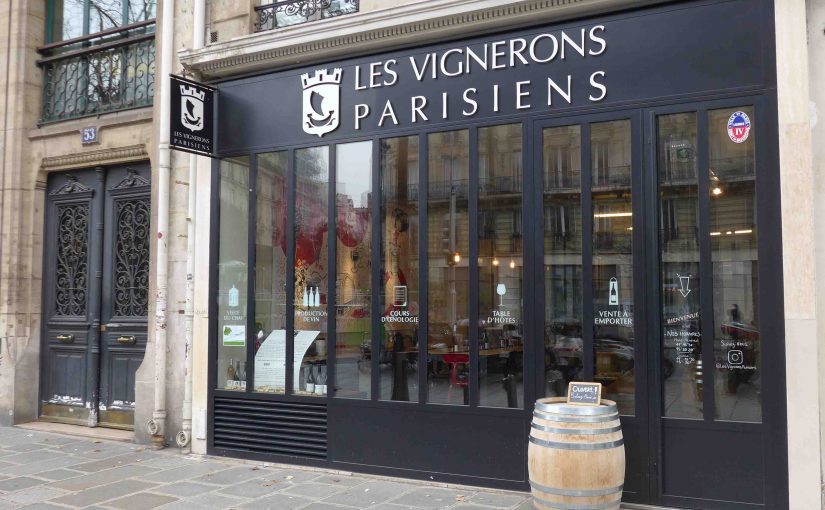 One cannot miss the shop window of Les Vignerons Parisiens: high picture windows, a contemporary inside looking like a neat and stylish warehouse, a black and white sign reminiscent of the coat of arms of the city of Paris (and its motto: Fluctuat nec mergitur) and next to the door an oak barrel on which a scholar’s slate invites us to enter: Open, Come in!

I have pushed the door and been welcomed by Marie. She is the only employee of the winery, smiling, ready to listen and answer any question. Her welcome has been so good that I decided to come back and attend an educational tour of the store the next day.

Les Vignerons Parisiens is the first urban Winery in Paris. The idea of making wine in Paris is Matthieu Bosser’s who joined together with three other partners, Emmanuel, the oenologist, Frédéric, the wine grower and Michel. Those Fab Four (‘quatre garçons dans le vin’) created the Winery in early 2015: they have rent vineyards in the village of Visan, located in the Rhône Valley, found premises in the 3rd arrondissement of Paris in the Haut Marais area, spent about eighteen months fitting them out… and getting the administrative authorization to produce wine in Paris.

At last they opened their store in April 2016: the 2015 wines were made in the Rhône Valley but since 2016 their wines have been vinified and bottled in their Parisian premises. During the harvest the grapes are put into small boxes and moved to Paris immediately in a refrigerated truck.  The destemming, the fermentation, the maturing -either in oak barrels or in stainless steel tanks depending on the wines-, the blending and the bottling are all made in Paris.

Quality and traceability, authenticity and freshness are the four watchwords for Matthieu and his team: All the vineyards have been grown biodynamic or organic for fifteen years, the harvest are handmade and apart of one of the white wines all the wines are made from a single type of grape, which is quite unusual and is in my opinion one of the most interesting qualities of their wines. For instance I had never tasted before a 100% Cinsault wine and enjoyed very much the remarkable and pure nature of their Turbigo 2016.

I have visited the place with Marie who is really a remarkable teacher. The tour takes about 45 minutes. It is very instructive, takes place even if you are the only visitor and can be made either in French or in English. It costs 25€ and ends with a wine tasting of 5 among their 6 wines. All of them have names suggestive of Paris: Lutèce and An 508, the two white wines; Turbigo, Les Templiers and Haussmann, the three red ones; and Sequana, the rosé, which is the only one not to be tasted. I guess you can understand all those names… but maybe don’t you know what happened in An 508? I didn’t but Marie taught me that this is the year when Paris had been for the first time the capital of France (thanks to Clovis)!

I loved the tour and highly recommend it to you! I have also appreciated all the wines without exception. As I could not afford buying one bottle of each – all of them are worth their price… but not cheap- I have chosen Les Templiers 2015, a red wine 100% grenache, my favourite, pure and well-balanced, a gourmet wine! Its price is in accordance with its quality: 19,50€; and fair.

Les Vignerons Parisiens-Display of the wines

And if you do not have the opportunity to visit the Winery in the rue de Turbigo you can nevertheless buy their wines in a few selected wine shops in Paris, including La Cave de la Grande Epicerie de Paris. An original souvenir to buy for yourselves or for a present! And if you feel a bit of nostalgia once back home do not worry: They have already started exporting their wines and no doubt that you will be able to buy them in your country fairly soon. Wine made in Paris is back… as it used to be in the 18th century. I mean very good quality wine, really to be tasted and discovered!